Building 43 is proud to celebrate Point Alameda’s rich history, especially its role in WWI and WWII. Please enjoy these photos of Navy veteran Joe Garcia - assigned to shore duty at NAS Alameda from early 1967 thru September 1969. He later attended Foothill Community College in Los Altos CA before transferring to Stanford.

1) Explosive Ordinance Disposal (EOD) – EOD was on call for any “explosive” issues that might crop up – two Chiefs were usually hanging around offering little or no grief to us NAS sailors (which was quite a surprise since Chiefs like to harass).
2) Magazine Crew – Several sailors were assigned to make sure the base magazines were properly monitored...they would clean and sweep them and recorded low / high temperatures of each, make sure the railroad rails on which explosives were stored were properly grounded and report the status to a grumpy Chief so he could tolerated us and our whining.
3) Transshipment Crew - Several sailors were assigned to take “items” from aircraft and ships and store them properly in correct Magazines. Explosives were categorized as: A: High Explosives, B: Rockets/JATO, C: Squibb's and pyrotechnics. Each had they own magazine and all the contents were kept track of...example: Class C squibs would routinely “age” and needed replacement...squibs were used in aircraft ejection seats as explosive “guillotines” to cut electrical cables as well as to power ejection of bombs from pylons. This required that all of us had to get special base drivers licenses for large 10 ton scissor trucks, forklifts, weapons loaders and semi’s.
4) Alpha Area – Guarded by the Marine Barracks, we temporally stored Special Weapons there on their way to/from Concord Naval Weapons Station and the fleet.
5) Torpedo Shop – Yes, Aviation sailors did load and unload torpedoes for fleet boats coming and going from Vallejo. There was a remote torpedo overhaul shop out near the Alpha Area where the motor units were check out while the warheads were stored in our magazines.
6) Fleet Exercises – We would load and unload practice weapons from various aircraft as they came and left the fleet. Hence, our team would have to be checked out on aircraft like: A-1, A-4, A-6, A-7 and others. To do so, we would go “TAD” Temporary Assigned Duty to NAS Whidbey Island (A-6) and NAS Lemoore (A-7 and A-4).
7) Missile Assembly – We would build up liquid fuelled Bullpup missiles and 2.75” rockets for base aircraft when they zoomed over to Fallon Nevada to scare rabbits.

We had three section duty which required 1/3 of us to sleep upstairs in your building to respond to off hour tasks like taking items off of aircraft coming in from Hawaii at “Oh Dark Thirty”.

I could go on and on but for now, I’ll share a 1972 NAS Alameda Weapons Department reunion photo and some Joe shots.” 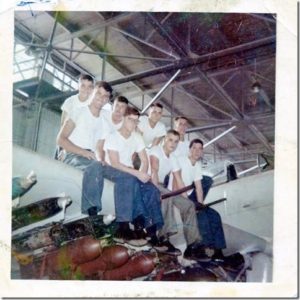 “1966 AO “A” school class on the wing of an Douglas A-1 “SPAD”…I’m the kid on the left…note used and beat up training weapons on pylons.” 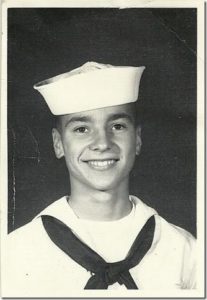 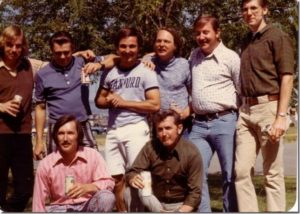 From Right to Left: 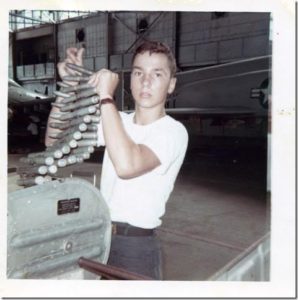